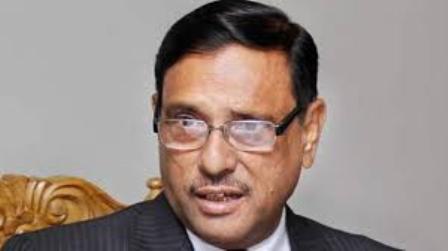 Road Transport and Bridges Minister Obaidul Quader on Saturday said the ongoing trial for crimes against humanity would continue even if Jamaat-e-Islami, which was opposed to Bangladesh’s 1971 independence sought apology for their crimes.

“It is not clear why Jamaat floated the issue of seeking mercy 47 years after the independence. It could be a political strategy of theirs,” Quader, also Awami League general secretary, told a press conference at the party president’s Dhanmondi political office here.

The minister described apology seeking by Jamaat as a speculation as the party, which has lost its registration in the Election Commission, is yet to say anything officially over the issue.

“Even if Jamaat seeks apology, the ongoing trial for war crimes and crimes against humanity will be continued,” he said.

Asked about Jamaat’s assistant secretary general Barrister Abdur Razzak’s resignation, the AL general secretary termed it as Razzak’s personal matter saying the issue of seeking apology will depend on the party’s organizational decision.

“Nothing is clear now about Jamaat’s move. It will not be rational to comment on the issue before the makes their intension clear,” he said.