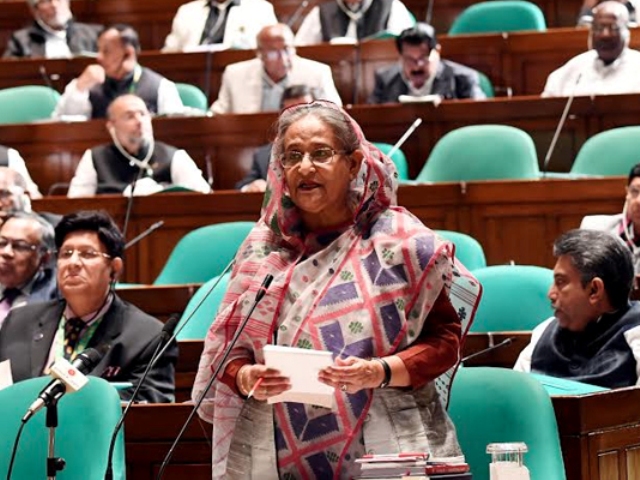 Prime Minister and Leader of the House Sheikh Hasina on Thursday said her government wants to control traffic signal
digitally to ease traffic jam in the capital.

“We want to control traffic in Dhaka city electronically and digitally…some parts of the capital have already been brought under such a system and if the system is introduced in rest of the parts, the sufferings of the people will be reduced to a great extent,” she said.

The prime minister was replying to a supplementary raised by Jatiya Party lawmaker Kazi Feroz Rashid in the House during her question-answer session
with Speaker Dr Shirin Sharmin Chaudhury in the chair.

The Leader of the House said her government has reintroduced automatic signalling system in Dhaka city which almost went out of order previously.

She said traffic could be controlled manually in some cases, but there are allegations that this system is applied in some areas for a long time.

“So I would like to tell the authorities, which control traffic signal, not to hold vehicles for so much time,” she said.

The Leader of the House said the traffics in Dhaka city are now struggling to control signal due to pressure of huge number of vehicles. “But traffic
jam will be reduced to a great extent if digital system is introduced in the entire city,” she said.

The prime minister said she almost gave up going out of residence as the traffics hold vehicles of the people when her motorcade moves in the city.
“Except attending office and other programmes, I seldom visit other places, and its reason is that if the traffic stops the public vehicles.”

Sheikh Hasina said when she assumed office in 2009, there were 52 vehicles
in her motorcade which was reduced to eight later. “Efforts are made always
not to keep extra vehicles in my motorcade,” she said.

Referring to the notorious traffic jam in London and Washington cities, the
Leader of the House said the traffic jam is now a worldwide problem.

She said the people are buying more cars and driving those as the
population is increasing and the financial solvency of the people is on the
rise.

The premier said she is pursuing politics and working for the welfare of
the people, not for herself.

“I try to know which is good and which is bad for the people and I also try
to solve their problems,” she said.

Sheikh Hasina said: “The people have elected us through vote and I think
it’s our responsibility to do work for them … I’ve taken it as my duty.”

She added: “The power is to me not a matter of enjoyment, it’s a matter of
serving the people. That’s why it is very much necessary to know the
country and for that reason, I always try to do welfare-oriented work for
the people.”

She said the past governments had taken decisions to stop the BRTC services
showing loss of the state-run organisation. “But after coming to power, we
reorganised the BRTC and purchased many buses and trucks for it,” she said.

The prime minister said her government is implementing a number of mega
projects including metro rail in Dhaka city under the public transport
system.

Sheikh Hasina said the biggest problem is that those who move in the city
do not follow the traffic rules. “Besides some people stop and park their
vehicles here and there creating various problems … had they moved in a
planned way, these problems would have been solved much earlier,” she
added.

In reply to a starred question from treasury bench member Didarul Alam, the
prime minister said a number of projects were executed in the last 10 years
through various ministries and departments while many schemes are under
implementation to ease traffic jam in Dhaka city.

If the schemes are implemented, she said, it is expected that Dhaka city will be freed from traffic jam very soon.

The Leader of the House said her government is considering implementing projects similar to Dhaka in Chattogram to reduce traffic jam there.-BSS