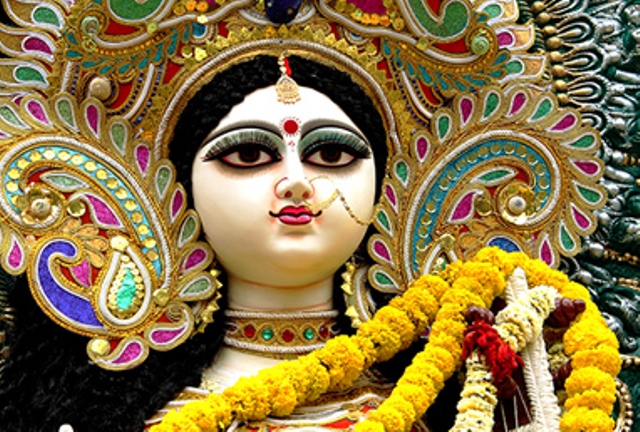 The Hindu community is celebrating Saraswati Puja, worshiping the goddess of knowledge, music, art and culture, across the country on Sunday like elsewhere in the world amid much enthusiasm, festivity and religious fervor.

President M Abdul Hamid and Prime Minister Sheikh Hasina, in separate messages, greeted the members of the Hindu community on the occasion of the Saraswati Puja.

They pointed out the heritage of interfaith harmony and the government’s commitment to ensure rights of all people belonging to diverse religions to build a non-communal and secular ‘Sonar Bangla’ as dreamt by Father of the Nation Bangabandhu Sheikh Mujibur Rahman.

Saraswati Puja or Basant Panchami falls on the fifth day of the Bengali month of Maagh each year when Hindus worship goddess Saraswati to mark the coming of spring.

Traditionally children are introduced to education and learning on the day of Saraswati Puja and this ritual is called “Hatekhori”. Toddlers are usually given a slate and chalk to scribble with on the auspicious day.

The students in particular seek blessings of goddess Saraswati in their pursuit of knowledge, art, music and culture.

Bangladesh Puja Udjapan Parishad General Secretary Nirmal Kumar Chattarjee told BSS that Saraswati Puja is now not limited to only Hindu community; rather members of every community specially the youths celebrate it spontaneously as a festival.

“A large number of non-Hindu community members are taking part in celebration of different religious festivals of the Hindu community which is a good sign to conserve the thousand-year-old non-communal Bangalee culture. This is the uniqueness of the Bengali nation and its culture,” he said.

Chattarjee said rituals of Saraswati Puja will begin in the morning at the Dhakeswari National Temple.

In most temples, houses and educational institutions, the Puja will begin in between 8am to 10am today followed by offering of “anjali”. Then the children will be imparted “hatekhori” (introduction to learning of children) and later prashad (foodstuff devoted to the goddess) will be distributed among devotees.

However, the puja had been held at some temples, houses and educational institutions yesterday as the Tithi (occasion) to hold the puja began yesterday morning and it will continue to this morning.

According to Hindu faith, goddess Saraswati represents power, creativity and inspiration and presents herself when the weather is pleasant and nature is in its full grandeur.

Depicted as a graceful woman with a crescent moon adorning her brow, she is shown riding a swan or a peacock, or is seated on a lotus flower.

The most gorgeous Saraswati Puja will be arranged on the premises of Jagannath Hall of Dhaka University where a huge number of devotees and crowd will throng to perform the religious rituals and visit the pandals circled on the playground of the university’s largest dormitory.

Jagannath Hall Provost Professor Asim Sarker told BSS that students from over 60 departments, institutes and faculties of the university have made arrangements for the puja on the playground of the dormitory this year.

Jagannth Hall administration is organizing the dormitory’s central puja at the dormitory’s Upashonaloy (place of prayers) while employees of the hall has staged several pandals to worship Saraswati.

“Every department of the university will show its own characteristics through their pandals and idols. They are preparing pandals and idols on different metaphoric themes and ideas,” Sarkar said.

He said pratima (idol) installation in the hall was held at 7.01 pm yesterday while the worshiping begins at 8.45 am today, offering of anjali at 10.01am and arati at 6.01pm. A cultural function will be arranged tomorrow.

Fine Arts Faculty students, however, are likely to take the lead at the Jagannath Hall puja with their creative and artistic works in the middle of a pond at the dormitory compound.

“A 45-feet gerua (mix of orange and red) colored Saraswati idol will be set up in the middle of the pond this year,” Uttam Kumar, one of the organisers of Fine Arts Faculty’s puja told the news agency.-BSS