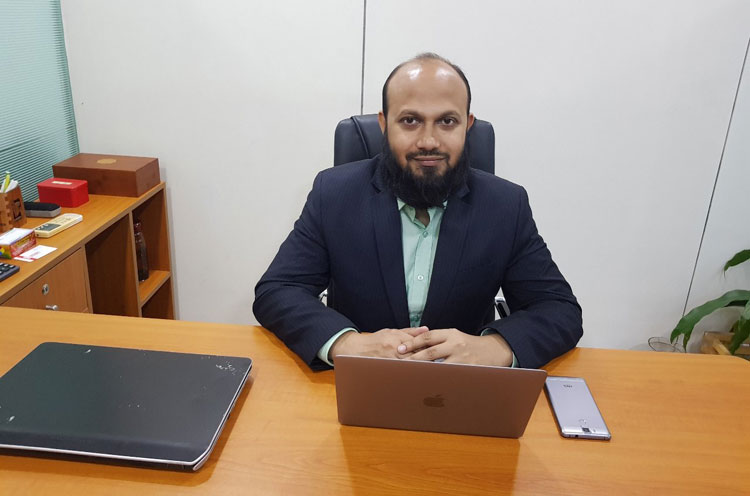 He took the charge of the head of mobile phone department of Daffodil Computers' Limited on November 1, 2015.

Since then, he started helping customers get cell phones at cheaper prices. He has already marketed feature and smartphones of nine brands.

bbarta recently sat with Taufiq at his office in Kalabagan, Dhaka when he shared his experience and expressed his wishes for future.

bbarra: How did DCL cell phones came to the market?

Taifuq: We are actually working on two projects-- one is international brand Lee Phone and the other is DCL monile phones. The Lee Phone, with both feature and smartphone versions, was marketed in the market in May last year. Most Lee Phones have the 4G facility. But, after that, Daffodil Group started business of locally made cell phones.

Taufiq: The production of DCL phones started last November, while the marketing in January. We have designed all the DCL phones. Most cell phones of the country are manufactured through OEM or stock project. But, the products of our institution are different from others. We have incorporated some special features on our products, considering the public demand. If a certain cell provides a 3000mAh battery, our ones have doubled the capacity. The lowest RAM that our phones have is 2GB with 16 GB ROM. The phones are so hard that Chinese people call them smartphones made of bulletproof glasses.


bbarta: How are DCL phone taking up the challenges of the growing market?

Taufiq: Challenge always prevails, was in the past and will remain in future. The current market is mainly based on prices. When Symphony and Walton came to the market, the challenge was much lower. But, now they would face a growing challenge if they tried to launch their products now. Local customers prefer low-priced cell phones. We are also providing a two-year warranty as another special feature.

bbarta: DO you have any plan regarding marginal people?

Taufiq: 63% of the phone users have feature phones. Daffodil has marketed a model worth Tk760 for them, which is a part of helping them get a quality phone at affordable prices. We are getting good response and also planning some more quality and reasonable phones.

bbarta: What impact will the increased import duty will put on the cell phone market?

Taufiq:  The finance minister proposed 10% import and finally imposed the amount, doubling the previous 5% duty on imported mobile phone and accessories. There is another 1% advance tax. Additional 1.25% charge is applicable. In brief, the added charges and duty will put a significant impact on mobile phones.

bbarta: Tell us about the future market of DCL phones?

Taufiq: We do not have a plan to grab the market fast. Firstly, we want to create a base in the market and gather customers’ feedback. Then we will be targeting to grab the market. After all, we want to run the business for long, not for the time being.
Like computers, we want to create a strong position on cell phones of local brands. In order to do so, we have to do more assembling. Keeping the matter in mind, we started working on the plan from last year. We have already sat with BTRC and NBR quite a few times in this regard.

We are also holding talks with the Kaliakoir hi-tech park authorities to get space allocated, where we are planning to assemble cell phones and computers of DCL brand. We want to be in the top position on the list of the companies assembling mobile phones. We want to manufacture products locally and encourage the people to use those.