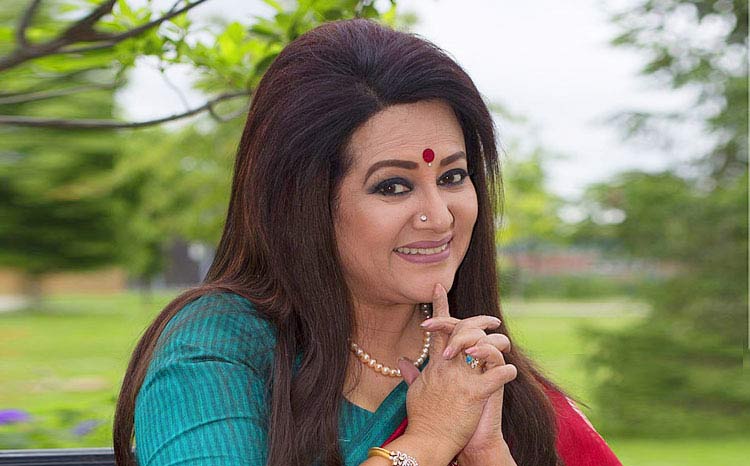 Celebrated film actress Bobita is one of the very few film artistes with international fame. Bobita, who is now almost detached from the film industry, is still repeatedly recalled for her brilliant big screen performance.

The seasoned actress still inspires young artistes and those with huge interest to build career in acting.

Bobita has been continuing her popularity since 1968. She also bagged a number of local and international awards, including the won the highest state honour for movies.

In over 40-year career, Bobita worked in some 280 movies with starring in around 150 movies.

Bonita has an only son, Anik, studying in Canada where she sometimes visits him, a scope for her to enjoy leisure.

bbarta recently interviewed her. Here, we have the exclusive interview.

bbarta: It’s been a long while since we saw you last. Why is that?

Bobita: I last worked in a movie called “Putra Akhon Paisawala” directed by Nargis Akter in 2015. However, I did not announce that I would not work in films. Actually, I did not get any offer for a good movie ever since. That’s why I couldn’t work. I was about to work in a movie, but rejected it the last minute because the script of the movie did not seem so interesting.

I achieved a lot from acting. So, I want to do highest quality work now. For instance, I may work in a movie “Mati” by Azizur Rahman this year. I am interested to work in it if everything goes on smoothly. The character which I am offered for and the script sounded good to me. Let’s see what awaits me.

I tell you one thing. I am a human dedicated to film industry. Hence, I cannot just reject a movie if it has a good story and character for me.

bbarta: Tell us something about you being called Bobita.

Bobita: My parents named me Farida Akter with the nickname Popy. Well, I first worked in the movie called Sangsar directed by Jahir Raihan, in which I had paired up with Mahmud Sazzad. Later on, I signed another movie “Jwalte Surujke Niche”. I was then named as Bobita by the then eminent photographer Afzal Chowdhury. Ever since, I am known as Bobita. Honestly, I am no longer called asPopy.

bbarta: Do you feel bad for this?

Babita: Yes, I do. But, not so much. Because, my parents didn’t even have any problem with the name. I myself took inspiration from the name and shone in career. Actually, name is not an important part of life. It’s work that counts at the end of the day. One is known for one’s work.

bbarta: Tell us about the awards you got so far.

Bobita: It feels really great to get awards. Winning three consecutive national film awards was just amazing and glorious to me. The honour inspired me a lost to work with complete concentration, passion and love in the next movies.

Batita: Satyajit Ray first offered me through a letter to cast in his movie. But, I did not take the matter seriously. A few days later, he sent further message over the matter since I did not respond. Finally, I along with my elder sister Suchanda met him in his home.  He gave a script and asked me to meet him again in a studio the next day. Then he examined my acting capacity. This is actually how I started my journey for the movie. What happened is now just history.

bbarta: What is your take on current situation of local film industry?
Bobita: With the passage of time, everything has changed. The same thing applies for movies. New trends are now in films here. In our days, things were much prospective in movies, by the way, which do not exist now. This is a result of lack of creative and promising artistes in the industry. So, it is high time educated and young people came forward to resolve the crisis.

bbarta: what’s your plan about the last days of your life?

Bobita: I don’t have any special plan in this case. I have already earned fame and love. I am grateful to the Almighty for what I am and have achieved so far. I want to work for the industry until my death because I love movies.

I want to do something for the welfare of general people. I feel so bad for the poor and helpless, especially for the underprivileged children.