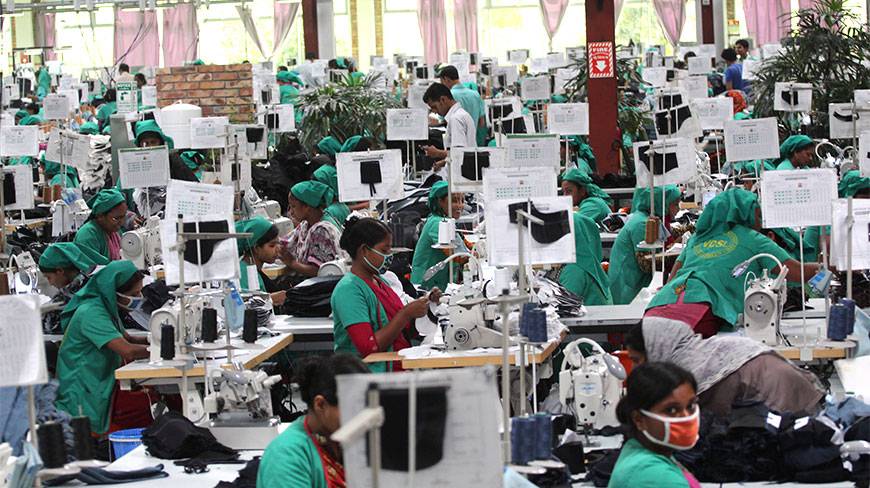 AA-A+
Bangladesh will emerge as a competitive market in RMG sector within next 10 years, said industry leaders and experts adding that more promising young people are joining in the industry after completing education abroad who will lead the industry forward.
Mohammadi Group Managing Director Rubana Huq said, “Within the next 10 years, Bangladesh will emerge as a competitive market and produce products. Our country produced cheap products earlier, now we are producing products for better value addition.”
Bangladesh Garment Manufacturers and Exporters Association (BGMEA) has already unveiled a roadmap to attain $50 billion export earnings by 2021 from the apparel sector.
The roadmap will concentrate on the priority and required activities that should be done to achieve the goal.
Babylon Group Director Emdadul Islam urged the media to disseminate positive and successful news to create a positive impression of the country’s RMG industry among global buyers.
“Bangladesh is ready to brand its product globally. We are the second largest RMG producer in the world after China. However, the difference in exports between the two countries is enormous. China’s export is nine times more than us. Bangladesh’s challenge is to reduce the gap for now and eventually emerge as the number one RMG exporter,” they added.
The analysts made the statements at a panel discussion on RMG at the Impact Investment Summit with the theme “Driving the Sustainable Agenda” in the capital recently.
The discussants said, “More knowledgeable young talents are coming back after studying abroad and joining the industry to lead it forward.”

Epyllion Group Managing Director Reaz Uddin Al-Mamoon urged the government to build basic infrastructure and institutions to develop entrepreneurship skills. He also expressed hope that there would be more positive entrepreneurship stories from the media.

Faruque Hassan, session moderator and senior vice-president of the Bangladesh Garment Manufacturers' and Exporters' Association (BGMEA), said, “Local entrepreneurs account for 98 per cent of garment exports. This shows the resilience of the domestic players.”

Viyellatex Group chairman David Hasanat said, “Business comprises three things—society, people and profit.” Laying stress on the concept that speed generates profit, Hasanat said, “Those days are gone where the lead time used to be 90 or 100 days; now it has come down to 50 days. We want to call ourselves solution provider and not product manufacturer.”
H and M chief representative, Roger Hubert, said, “Bangladesh is now more competitive than ever before, and we are ready to invest in new technology for enhanced efficiency, faster delivery and cost effectiveness.”
In the 2016 World Investment Forum, Bangladesh was given an exclusive platform among world business leaders whereby it was highlighted as a role model due to its readymade garment (RMG) sector progress.
The roadmap as dubbed "Bangladesh RMG Roadmap: Targeting US$ 50 Billion Export by 2021" jointly prepared by the RMIT University of Australia and BGMEA was unveiled in Melbourne, said BGMEA.
BGMEA president said the roadmap would give important directives towards attaining the Vision-2021.
After the independence in 1971, Bangladesh was one of poorest countries in the world. No major industries were developed in Bangladesh, when it was known as East Pakistan, due to discriminatory attitude and policies of the government of the then West Pakistan. So, rebuilding the war-ravaged country with limited resources appeared to be the biggest challenge for us.
The industry that has been making crucial contribution to rebuilding the country and its economy is none other than the readymade garment (RMG) industry which is now the single biggest export earner for Bangladesh. The sector accounts for 81 per cent of total export earnings of the country.
bbarta/KF
Latest News