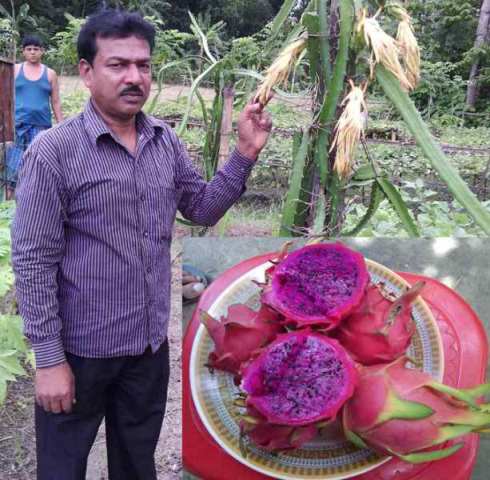 The commercial cultivation of dragon fruit is being done widely in parts of the country. This dragon fruit orchard in Jessore shows its 2-year-old plants have started to blossom and many of the trees are bearing fruits.

Other than selling, local farmers are enjoying their harvest of the eye-catching and tasty fruits and also sending those to their relatives.

As any other places, local farmers started growing pitaya, another name of dragon fruits, commercially first in  Polashi, one of the remote villages of Manirampur upazila in Jessore. 10 farmers of the village started cultivation on agricultural lands, while 50 others on their home premises.

Large dragon fruits are in the plants now.  Farmers are selling the fruits at Tk 400 per kg.

Agriculture Extension Department (AED) officials hope that the exotic fruit variety that is cultivated in a short space will meet the demand of nutrition and economic security.

According to AED, a farmer can make at least Tk 5 lakh each year by selling dragon fruits.

During a recent visit to a dragon fruit orchard it was noticed that every two plants has a gap of around 6 feet in between. They also planted seasonal vegetables such as aubergine, pointed gourd and papaya. The pitaya plats, however, are tied with sticks or poles so that they remain straight.

The pitaya plats have grown up to 8 feet there with Night Queen-like flowers being blossomed. Many of the plants are bearing the deep purple fruits.

A farmer, Pradip, said he came to know about the mouth-watering and nutritious fruits and profit by growing it through a joint project called Safal of the AED and a non-government organbisation Jagoroni nearly two years back.

An inspired Pradip, planted 50 pitaya plants in 400 decimal of land. Later on, he expanded the range of his land to plant more pitaya plants. He has over 200 plants currently and has sold 26 plants for Tk 100 each.

Answering to a question, he said he sold out nine pitayas at Tk 900 recently and was mulling of sell more in some days.

Parmal Kha, another farmer, said, “I planted 40 pitaya plants in 200 decimal of land and 22 of those have already started giving fruits. I along with my family ate some pitayas and sold the rest.”

He claimed that the cultivation did not cost them even a single penny.

“We produced vermi-compost fertiliser and used them in my orchard. In addition, I just had to put some bamboos so help my pitaya plants stand tall.”

Prakash Kumar, another farmer, said he cultivated dragon fruit in 300 decimal of land.

“My plants have begun giving fruits. I have 2 kg pitaya at home. We enjoyed some of the fruits and sent some to by elder brother living in town.”

Yet another pitaya grower, Pradip Kumar planted the dragon fruit plants in 400 decimal of land. He claimed to have sold 3 kgs of pitayas for Tk 1200.

Stating that he learnt the method of cultivation from Safal project, he said pitayas grow well on highlands and each plant lives up to 20 years.

Contacted, Nazmul Hossail, technical officer of the project, said pitayas useful for diabetes patients can help farmers earn Tk 5 lakh, except for the production costs, within a short time.

He claimed that local farmers are becoming more interested to grow pitayas because of the fruit is highly profitable.

“Though 10 farmers started cultivation of pitayas in the beginnig here, we have 50 others doing it on their mohe premises.”

Rabiul Islam, observation and assessment officer of the same project, said they have facilitated marketing of the produce of the farmers.

Manirampur Upazila Agriculture Officer Sushanta Kumar Tarafdar over phone said that they were providing the farmers with technical supports over pitaya cultivation.