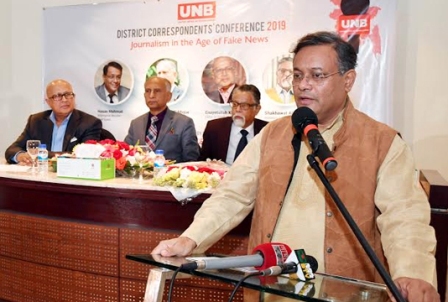 “BNP’s movement in the name of releasing Begum Zia from jail was weak as there was no coordination and trust among the leaders of the party,” he told reporters after addressing the Annual District Correspondents’ Conference 2019 of United News of Bangladesh (UNB) at its head office in the city.

Additional Press Secretary to the Prime Minister’s Office Nazrul Islam and Online Editor of Channel i Zahed Newaz Khan will, among others, addressed various sessions of the conference.

Some 100 UNB representatives from across the country, including those working in Dhaka, attended the conference.

Hasan said, “The politics of BNP, in last 10 years, was limited only to endeavors to save Khaleda Zia and her son Tarique Rahman from trials, to form caretaker government and to foil the polls. As a result, they killed and burned people and vandalized state properties. They don’t do politics for the people.”

About a comment of BNP leader Rizvi Ahmed, the minister said he talks with media daily for coming to the limelight.

“Everybody, the state and the society will be benefited if we see synchronization between media freedom and accountability,” he said.

Hasan said time has come to think globally and work together on how to deal with fake news and rumours on social media platforms through establishing an ‘Internet Ombudsman’ as freedom of media and accountability are equally important.

“We need to discuss it deeply. Together, we’ll work out how the unedited platforms (social media platforms) can be brought under rules and regulations,” he said, adding that the government will take a decision in consultation with stakeholders in the media industry.

The information minister said the internet has opened a wider window for all though the social media network. “Now, Bangladesh has around 8 crore internet users which was 8 lakh in 2008.”

The minister said the government is working to implement the 9th wage board for journalists.-BSS