Tarique will be returned home to face justice: PM 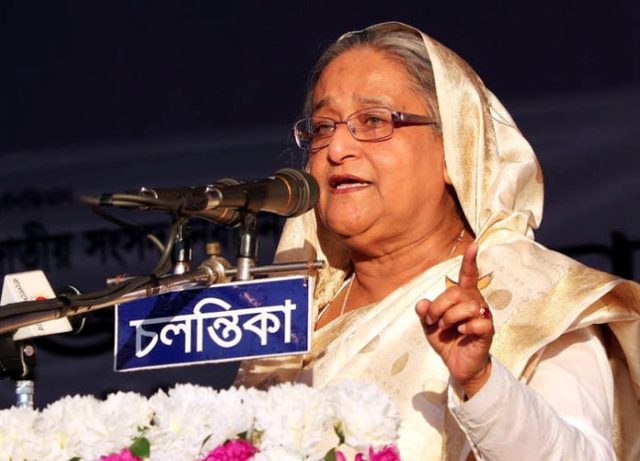 Awami League President and Prime Minister Sheikh Hasina on Saturday vowed to bring BNP’s “fugitive” acting chief Tarique Rahman back home to be exposed to justice in execution of court verdicts handed down to him.

“If the almighty gives us days we will bring him (Tarique) back to the country and execute the verdicts,” she said while addressing a mammoth election campaign meeting at Sylhet Government Alia Madrasa Ground after offering prayers at Hazrat Shahjalal’s (RA) shrine.

The premier dubbed Tarique as the kingpin of militancy, terrorism and corrupt practices who played with the fate of the people while he is now living in London visibly to evade the justice.

A special court earlier this year sentenced Tarique to life imprisonment for masterminding the August 21, 2004 grenade attack killing 24 Awami League leaders and activists while the High Court sentenced him 10 year prison term in a graft case involving a charity named after his father.

“We will not allow anyone to play with the fate of the people of Bangladesh,” Sheikh Hasina told the rally organized by Sylhet district and city units of her party while it was chaired by district AL’s acting president Lutfor Rahman.

The premier said Bangladesh would go ahead with honour and dignity “which it has earned over the years” and urged people to cast their votes for Awami League (AL) and its allies in the coming election for the continued
development spree.

She introduced the candidates of her party and Awami League-led grand alliance with the crowed at the meeting, joined and addressed as well by Finance Minister Abul Maal Abdul Muhith among others.

Sheikh Hasina said corrupt practices grabbed BNP to such an extent that they put on auction the nominations of their candidates across the country dejecting many of their leaders.

“Being depressed with the attitude of the party senior BNP leader and former ambassador Enam Ahmed Chowdhury has joined Awami League,” she said.

Sheikh Hasina arrived in Sylhet this morning on a daylong tour in the second leg of her election campaign when she went first to Hazrat Shahjalal’s (RA) shrine and then offered ziarat at the shrines of Hazrat Shah Paran (RA) and Hazrat Gazi Borhanuddin (RA).