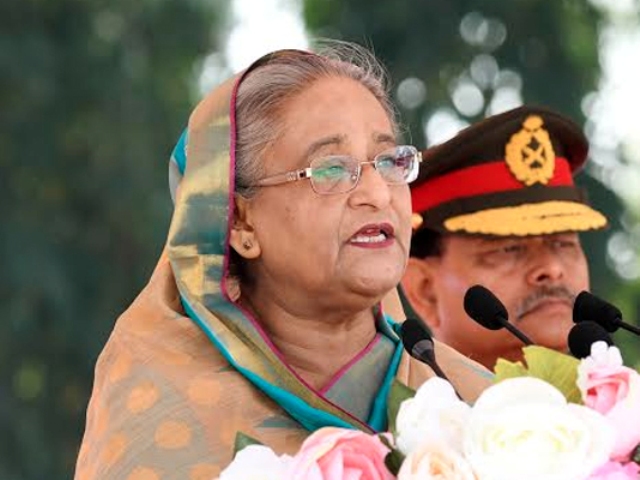 Prime Minister Sheikh Hasina on Sunday directed members of Bangladesh Army to keep a constant vigil to face any “internal and external threats” for safeguarding the country’s constitution and sovereignty.

“You will have to always remain ready to face any ‘internal or external threats’ unitedly for protecting the sacred constitution and sovereignty of the motherland,” she said.

The prime minister was addressing the “national standard” handing over ceremony of the Bangladesh Infantry Regiments (BIR)-7th, 8th, 9th and 10th at Shaheed Colonel Anis Parade Ground at Rajshahi Cantonment here this morning.

She handed over the national standard to the commander of the respective regiments.

A smartly turned out contingent of Bangladesh Army gave salute to the prime minister through a spectacular parade.

Along with Chief of Army Staff General Aziz Ahmed and the parade commander, the prime minister reviewed the parade riding on a decorated open jeep.

Describing Bangladesh Army as an “asset” of the country and a “symbol” of the confidence and the trust of the people, the premier also asked its
members to be more “professionally-efficient” and “welfare-minded” with social and religious values.

“Bangladesh Army is our asset and a symbol of confidence and trust of the people…so, you will have to be more competent, efficient, honest and
welfare-minded being imbued with social and religious values to achieve desired standard of professionalism,” she said.

Noting that her government always received constant support of the army to serve the people, Sheikh Hasina expressed her firm belief that the army will
stand beside the people whenever it will be necessary during the running of the state by the present government.

The premier said the members of Bangladesh Army played an important role in upholding democratic trend of the country by performing their
responsibilities with utmost sincerity in the 11th Jatiya Sangsad polls.

“I extend my thanks to you for it and I also express gratitude to the countrymen for getting a scope of formation of the government for the fourth
time and the third consecutive term,” she said.

The premier said her government always wants to run the country as the servants of the people, never rulers.

Mentioning that the government is pledge-bound to build a modern and all-round armed forces, Sheikh Hasina said for this, the government has framed
the Forces Goal-2030 which is being implemented in phases.

As part of it, she said, new infantry divisions, brigades, units and training centres were established. Besides, three new divisions were formed
in the army, she also said.

The prime minister said her government has established para commando brigade for the first time, while MLRS and Missile Regiment have also been
added to the army for further strengthening the country’s air defence system.

Besides, the present government has strengthened operational capability of the army to a great extent through inducting various modern war equipment,
helicopters and modern infantry gazettes to keep pace with the developed world, she added.-BSS