PM for cooperation among Asia-Pacific nations to combat natural disasters 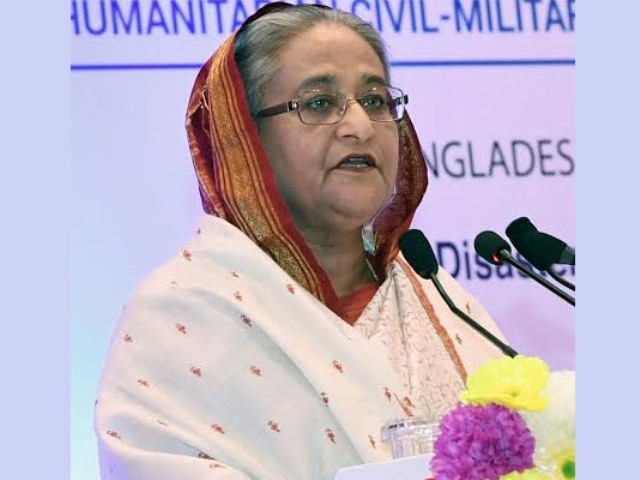 Prime Minister Sheikh Hasina on Thursday put emphasis on cooperation among the Asia-Pacific nations, especially among neighbours, to combat natural calamities, describing it as very important to face damage of greater magnitude.

“Collaboration among the nations of Asia and the Pacific region, especially among neighbours, is very important in facing damage of greater magnitude from any natural calamity,” she told the inaugural ceremony of the 4th session of the Regional Consultative Group (RCG) on Humanitarian Civil-Military Coordination for Asia and the Pacific at Hotel InterContinental here this morning.

The premier added:”We would not be able to prevent natural disasters, but we can reduce the extent of damage through our prudent works. In Bangladesh, we are also putting emphasis on mitigation programmes.”

The Ministry of Disaster Management and Relief has organised the three-day event.

“We can’t ignore the manmade disasters like traffic accidents, building fire, building and bridge collapse, terrorist attacks etc. We have to undertake appropriate measures to arrest these disasters,” she said.

The prime minister said the mother earth is facing increased intensity of disaster possibly due to the impacts of climate change.

Sheikh Hasina said the losses incurred between 1998 and 2017 amounted to around USD 3.47 trillion in PPP.

According to the Index, she said, Bangladesh is at the 9th position among 10 most affected counties. In the index of 2014 and 2015, Bangladesh was at the 6th position, she said.

The premier said although Bangladesh has very nominal contribution to the climate change but it is one of the most affected countries by the impacts of global climate change owing to its geographical location.

Sheikh Hasina said Bangladesh’s territory experienced many devastated disasters over the period. The most dreadful cyclone in the recent memories happened in 1970 that killed around one million people in the country’s coastal districts, she said.

The premier said with undertaking of various measures, including improvement of early warning generation and dissemination, establishment of cyclone shelters and active engagement of dedicated CPP volunteers in the preparedness and response activities, the mortality from disasters has drastically been reduced in the recent times.

“Now we’re replicating the CPP model for other disasters. This paradigm shift has helped us adapt to the changes of global policy instruments such as Sendai Framework, Sustainable Development Goals and Paris Agreement on Climate Change in 2015,” she said.

As a result, Sheikh Hasina said, Bangladesh is now known as a role model of disaster management and now moving towards building resilience.

The premier said relevancy of Humanitarian Civil-Military Coordination is ever increasing in the face of increased number of large scale emergencies in the region.

“Regarding disaster response, civil and military actors have been working together, especially on search and rescue operation, dead body and debris management or the restoration of bridge and roads,” she said.

“We are thankful to the member states of RCG for electing Bangladesh as the chair of the group in 2017,” she said.

The premier said Bangladesh is advancing towards national resiliency guided by its vision 2021 and 2041 to contribute to global commitments and targets.

“Our national humanitarian architecture is quite supportive for Civil-Military Coordination. Within the scope of the Disaster Management Act 2012, a unified coordination mechanism has been established,” she said.

The prime minister said the plan, to be implemented in phases, will enable Bangladesh to face the risks of climate change and disasters as well as ensure food security.

Sheikh Hasina said Bangladesh is working on institutional improvement of humanitarian response mechanism. “We’re establishing the Emergency Operation Centre (EOC) for effective and timely response as well as smooth coordination of any emergency operation,” she said.

The premier said the Ministry of Disaster Management procured equipment worth about Taka 2.36 billion during the last few years for search and rescue operations and these equipment have already been handed over to Armed Forces Division and other relevant government organizations.

Mentioning that infrastructural support is very much critical during any crisis, she said Bangladesh always tries to build upon the learning.

The prime minister said that the government has already undertaken a plan to expand and rebuild Saidpur Airport in northern Bangladesh to serve the adjacent regional demand in similar emergency.

“Our road, rail and river connectivity is improving and expanding. All these investments will benefit the neighborhood providing alternative routes of communication during emergencies within the region,” she said.

In addition, she said, Dhaka Declaration from International Conferences on Disability inclusive DRR in 2015 and 2018 is playing an important role as practical guideline for inclusive implementation of Sendai Framework for Disaster Risk Reduction.

“Being inspired by the spirit of the whole of society approach, we always promote volunteers and civil society engagement in the humanitarian response,” she said.

The premier said there are about 2.4 million Ansar-VDP members, 1.7 million Scouts, 0.4 million Bangladesh National Cadet Corps (BNCC) and 0.4 million girls guide volunteers who are always ready to act as volunteers during any disaster.

“Besides, some 32 thousand urban volunteers and 56 thousand Cyclone Preparedness Programme (CPP) volunteers are also active across the country to respond any emergency,” she said.

Wishing success of the 4th session of the Regional Consultative Group (RCG), the premier hoped that this session will create an opportunity for the participants of the member countries to exchange knowledge and ideas to face any future disaster more efficiently.

State Minister for Disaster Management and Relief Dr Mohammad Enamur Rahman addressed the inaugural session of the RCG as the special guest, while secretary of the ministry Mohammad Shah Kamal presided over the function.

A video presentation on Civil-Military Coordination on Disaster Management was made at the function.

As many as 150 representatives from different countries of Asia and the Pacific region are participating in the three-day event.- BSS