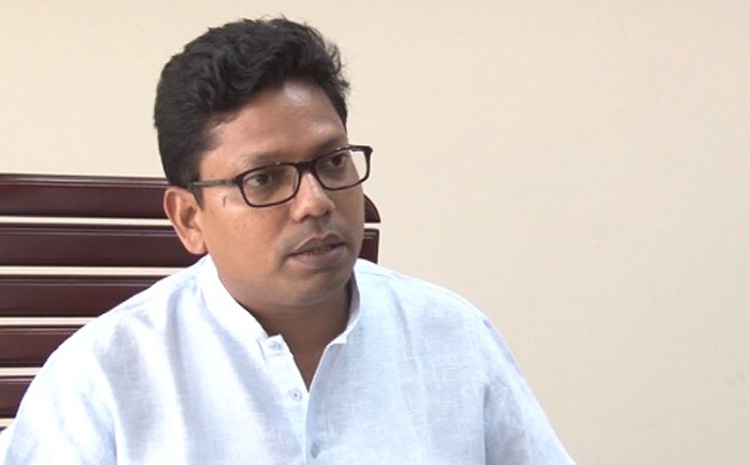 Digital World-2016, an international summit on information and communication technology (ICT), is scheduled to start on Wednesday. With the theme “Non-Stop Bangladesh”, the summit will provide visitors with the idea on how 40 ministries operate.

As many as 34 foreign speakers will moderate 18 sessions of the 3-day event with 8-10 ministers attending it which will be held Bashundhara International Convention Centre in the capital.

With this Bangladesh is organising the summit for third time. The ICT division, BCC, Basis and A2I are jointly arranging the programme. All kinds of preparation have already been taken for the event.

In an exclusive interview with bbarta, State Minister for Information and Communication Technology, Zunaid Ahmed Palak, shared his impression over the summit. He told the news portal about the aim, expectation, activities, planning and impact of the event. He also talked about the 20th national council of Awami League.

bbarta: What is the goal of  Digital World Summit-2016?

Palak: Under the proper leadership of  Prime Minister Sheikh Hasina and the guidance of ICT adviser to  the Prime Minister Sajeeb Wazed Joy, we have been advancing our goal to build a Digital Bangladesh.

Basically, we want to establish the country on four pillars --- e-governance, human resources development, internet connectivity and promotion of industry. Digital World is such a platform where Bangladesh has earned the capacity on these four sectors. We want to highlight out capability and experience through such platform.

In doing so, we organised a software exposition. We also want uphold how our mobile innovation, e-commerce, start-up and innovators are performing. We also want to highlight their innovations on e-governance, software and mobile gaming. This will help us focus on the progress of e-governance and innovation capacity by local software firms at home and abroad

There will be ICT career camp. We will create an opportunity for the next generation to help build career in ICT sector. We also have a plan to show the outer world how closely the 160 million people of the country have endorsed our bid to build a Digital Bangladesh. In a nutshell, the summit is mainly aimed at letting the countrymen know the updates in ICT sector and create awareness among them for this very field.

bbarta: Why is the main theme of the event “Non-Stop Bangladesh”?

Palak: Bangladesh is advancing fast and smoothly under the leadership of our prime minister. We used the logo styled “Non-Stop Bangladesh” so that our young generation proceed on with a non-stop spirit as the way the premier in working.

Palak: Some 35 foreign speakers will moderate 18 sessions of the 3-day event which will witness the presence of 8-10 ministers. Prime Minister Sheikh Hasina will inaugurate the programme, the 3rd of its kind. Her ICT adviser Sajeeb Wazed Joy will be accompanying her then. Joy, as the keynote speaker, will highlight e-governance, human resource development, connectivity in ICT sector and its development at the minister-level gathering.

bbarta: What will the impact of the event on local ICT sector?

Palak: I believe that the summit will greatly put an impact on the country’s ICT industry. The people will learn about where Bangladesh was, is and want to go in ICT sector. It will help rise in investment in this field. Mass awareness on ICT amd internet will increase. The masses will have idea on mobile gaming, start-up ecosystem, outsourcing and ecommerce. This will help an increase of women’s participation in ICT sector.

bbarta: Many countries are making a lot of money by software export. Compared to them, Bangladesh is still lagging behind in this case.   How do you find the matter?

Palak: Our prime minster revealed her plan on Digital Bangladesh in December, 2008. Considering the vision, we have been trying to help the ICT advance since then. We used to have just $7 million export/ year then. But, in course of time, the amount has shot up to $750 million a year now, courtesy to proper policies and support from the government.
The PM’s ICT advisor has set a massive $1billion target for the ICT sector by 2018. Meanwhile, the premier has a target to raise the export volume to a skyrocketing $5 billion amount by the year 2021. We are working to reach both targets. We have already advanced a lot and hope that we can make it home by 2021.

bbarta: Internet speed in a number of foreign countries is 5.1Mpbs while it is just 1.1 Mbps. Why is it so?

Palak: We had a chance to get connected with submarine cable at free of cost back in 1992. But, we missed that only because of the incompetency the then head of the government, leaving us deprived of free internet service. Bangladesh had to miss out a golden chance of internet connectivity then, because of ineligibility of the Prime Minister, also the BNP chief, Khaleda Zia.

This resulted in us being 20 years behind. Comparing the situation, we have managed to reduce the price of internet services, increase internet speed, spread internet connectivity across the country, launch internet-based services of government offices and internet related employment in last 7 years and a half.

By the end of 2008, the internet users numbered less than a million. But, the figure is now more than 64 million over the period because of our measures in this regard. We are planning to bring some changes in our broadband policy. The PM’ ICT adviser has already advised the authorities concerned to work on this. He has declared to make 5Mbps as the minimum internet speed. Thus, our country will advance as many other nations did. This is the result of the timely and quick measures of our government.

I firmly believe that we will be one of the leading countries in ICT sector by 2021.

bbarta: As you said, the number of internet users in the country is now over 64 million. But, most of them use Facebook  on cell phones. Is it the proper way to use internet?

Palak: We do notice this trend being in effect across the world. Facebook is considered an entry point of internet. They get into different arenas through Facebook. They visit news portals and other websites using Facebook, which is just a platform in the internet world. For instance, one goes to a highway and then board on a vehicle and travel to different spots via roads lined to the highway. Internet is just like a highway.

Internet has many options to surf through such as Facebook, google, google chrome and Mozilla etc. The internet users get to innumerous sites by using these tools, search engines or links. There is nothing wrong if someone start using internet through Facebook. Because, this will help raise the number of inter users. Bangladesh has an estimated 20 million Facebook users.  They are texting, talking and video chatting through Facebook messenger.

This is helping them come to know about news and other contemporary issues, increasing IT literacy among them gradually. I reckon Bangladesh is among the fastest countries in terms of internet usage. The amount of internet literacy in the country is now 40%. We hope to make it cent percent soon. With the way we are progressing, I think we will become an IT-based middle-income country by 2021.

bbarta: Now, we are moving to different point. What is your expectation centering the 20th national council of Awami League?

Palak: Awami League has always brought something new for the countrymen. There will a guideline for the nation from the prime minister, who is also the party chief, in the event. We are waiting for that and hope to have a guideline for the future leadership and important outline for future Bangladesh.

bbarta: What impact will the council have on the country’s politics?

Palak: Awami League has a leading role in the development in every sector of the country ever since its independence. The young generation will know about Bangladesh, Liberation War and Awami League through the council. They will have guideline to help build a developed Bangladesh in future.