'Acting is my love, passion' 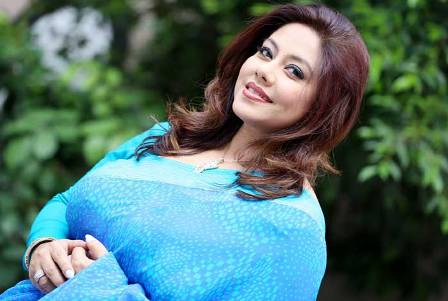 It is almost a piece of cake for seasoned actress Shami Kaiser to leave audience or viewers spell-bound through her out-of-the-world performance. This is why she has been so much favourite to entertainment-loving people regardless of their ages and social strata.

Shami was once called as the queen of small screen by viewers and dramatists. A gorgeous Shami has recently made a comeback after taking a break into her brilliant career. But, it appears that she did not lose her position among the masses, even after refraining from acting for days.

Once a busy actress, Shami tries to appear in at least one drama on Eid. There was no exception for her in last Eid.

bbarta.net correspondent Ovi Moinuddin talked to the beautiful actress of late. Here is the interview for our readers…

bbarta: As we know, you did acting on merely one drama “Shesher Pore” last Eid. What was the feedback on it?

Shami: Honestly, I don't get as much response as I used to get after any of my drama being telecast in the past. This is happening because the number of television channels has increased and so has the number of viewers. Moreover, people are busier these days, thus, finding it tough to remember which channel airs which drama at a certain schedule. Most of the people don’t really want to enjoy drama amid this much pressure. Then again, there are some viewers who want their favourite artiste on screen. Maybe, I still get response from such viewers through cell phones or Facebook. Well, I bagged satisfactory feedback after doing “Shesher Pore” directed by Choyonika Chowdhury. As always, I also enjoyed working with my all-time favourite co-artiste Mahfuz Ahmed.

bbarta: Your work “Anumoti Prarthona” in the previous Eid (in 2015) was also with Mahfuz under the same direction. So, what’s your assessment about him?

Shami: Our career in media started almost at the same time. Maybe, I stepped into the media world just a couple years before Mahfuz did. He was a journalist, and switched to media all of a sudden. He was so hard-working only to become a dood actor, which ultimately helped him make it happen. Viewers also liked me pairing up with him. This is, perhaps, one of the reasons of me working with him the most. Considering the fact, we worked together in last two Eid-ul-Fitrs.

bbarta: What is the reason that keeps you away from acting?

Shami: Actually, I remain busy with my business firm Dhansiri, which makes it an uphill task for me to manage some free time for acting.

bbarta: But, viewers miss you and your acting a lot. What’s your impression about that?

Shami: Yes, I do know that. With due respect, I would like to tell my fans that I am engaged with so many works that I hardly can manage some spare time for acting. But, I will do acting sometimes and that too out of my love. Whatever I do, I just love acting most. I feel it so much from the core of my heart. Perhaps, that’s why viewers want my appearance on screen. I personally miss it as well. But, there is no way left for me to continue acting as the past.

bbarta: You are not even directing dramas. But this is something you can do easily, can’t you?

Shami: Direction is a tough job and it needs a lot of thinking and knowledge. For the time being, it is not possible for me to think about it. I am not even contemplating to do so in the future. I, however, prefer writing. Hence, I try to pen screenplays. I try to focus on the issues that I think of very often. I may write drama professionally. Nevertheless, there is no possibility of me directing a drama.

bbarta: Tell us about the starting of your acting career.

Shami: Well, it was back in the late 80s. I made my debut in media by acting in a TV drama "Ke ba apon ke ba por", directed by Atiqul Islam Chowdhury. After that, I worked on a three-episode drama serial styled Joto dure jai produced by Abdullah Al Mamun.

bbarta:  Could you please name some of your successful works?

Shami: I am not sure if they are notable works of mine. But, the dramas I liked include Nakshatrer Raat, Chhoto Chhoto Dhew, Sporsho, Ekjon Ariyana, Akashe Onek Raat, Mukti, Ontore Nitrontor, Swapna, Thhikana, Porichoy and Samparka. I also worked in two movies, one of those, Hasan Raja, was directed by late Chashi Nazrul Islam while the other, Lalon, by Tanvir Mokammel. I really felt amazed acting in the films.

bbarta: Your last drama serial was directed by Abul Hayat, who was one of the co-actors of your maiden work. What reaction did you get from viewers?

Shami: Mr Hayat is a brilliant actor embodying a great personality. Despite knowing my immense busyness he allowed me to play my favourite character in his production Akasher Opare Akash. I am grateful to him for that. I would also like to add that I had spent much more time to him. But, I feel that my acting would have been much better if I spend much time. However, I got great response after acting in the drama serial. I was really impressed at the love and care by my co-artistes during the shooting. I convey my love for all of them.