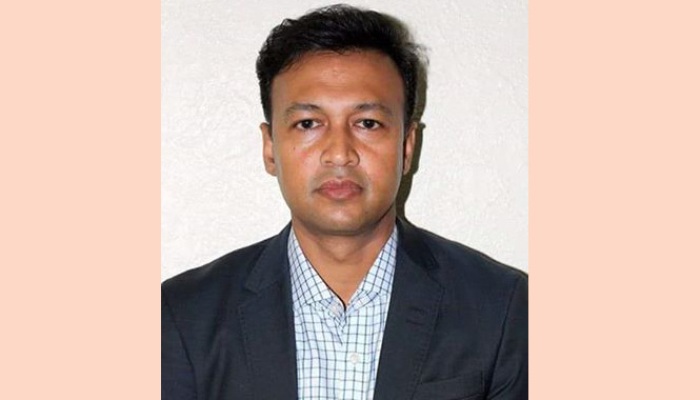 Despite being a Bangladeshi physician in Denmark, Dr Bidduth Barua is an active politician and is the general secretary of Awami League (AL) there. A former vice president and literary secretary of Dhaka Medical College students’ union, Dr Barua was the convener of  Chhatra League of the medical college. In addition, he was also elected the Dhaka Medical College unit president of Swadhinata Chikitsak Parishad, pro-AL doctors’ association, in 2006.

After completing his MBBS, Dr Barua went to Sweden in 2007 and secured his Doctor of Medicine degree from Karolinska Institutet, one of the world´s leading medical universities. Then he completed his Master of Public Health degree.

However, the medic is also serving as the founding chief executive of Copenhagen-based Health Tech Foundation.  Dr Barua is currently in Dhaka and visited bbarta.net office on Sunday evening when he told about his dream on the country. Here is the interview of Dr Barua for the readers of bbarta.net …

bbarta: How do you feel after returning home after a long while? What changes do you see here now?

Dr Barua: I came back home after one and a half years. By this time, a lot of infrastructural development has been made and lifestyle of masses saw some changes as well. The same applies for professionalism. These changes indicate improvement in overall development in the country.

bbarta: There have been no changes in differences between Bangladesh and Denmark. Could you please tell us something about the differences in politics, law and order, administration and social affairs?

Dr Barua: The socioeconomic and political difference between the countries is huge. Demark has a population of merely 5.5 million, which is less than that of Mirpur area in Dhaka. However, almost all the Danish people are under technological network, which helps the administration take care of the people’s convenience, especially security easily. Normally, Danish people conform to laws.

On the contrary, Bangladesh has a vast population. We are trying to gain the status of middle-income country from the low-income group. We still lack the practice of abiding by laws. I can share something I had experienced about it.

I was travelling on a car to Dhaka Cantonment from Shahbagh and the traffic was much chaotic. But, as soon as I reached Jahangir Gate, the traffic started moving with discipline. Does not this imply that we are never used to follow rules or laws? I think our administration must go tough on such issues.

bbarta: What about Bangladeshi expatriates and other foreigners in Denmark?     What is Danish government’s policy on them?

Dr Barua: Expatriates doesn’t necessarily men people from India, Pakistan or Bangladesh. The immigration process in Denmark was easy, but, in course of time, the process has changed a lot. As you know, many European countries including France, England and Belgium saw some militant attacks in recent past, thus, making immigration process tougher.

bbarta: You have learnt about the recent terror attacks and militant acts in Bangladesh. What is your suggestion about the role of the government and countrymen to contain such situation? And, what do other Bangladeshi expatriates think about the issue?

Dr Barua: Militancy has been existing in the country for around 10 years now. Honestly, almost militancy has spread out across the world and now it is a global problem. World leaders must work together to settle the issue. Bangladesh government and opposition parties have to work with seriously in the regard as well. If any party does politics out of the greed of power, it will not be possible to overcome the problem.

Well, if I tell you about the thoughts by Bangladeshi expats, I got to say that there is no major difference between the thinking of ours and the countrymen. Perhaps, we are fine in Denmark, but we always think of our relatives back at home. It feels bad if they are in trouble.

bbarta: What about practice of Bangladeshi culture, literature and journalist there? Do all of them remain busy doing professional or personal tasks?

Dr Barua: As you know, we have to work for 8 hours. Those living there with their families pass time with them. We also enjoy holidays. But, we never forget to mark our national days, especially Pahela Boishakh, Independence Day and Victory Day. We organise get-together on such occasions.

Nevertheless, we don’t have enough scope to practice culture. Then again, I managed to construct my own library because I love reading. There are some Bangla publications in the central library of Denmark. Had our embassy taken imitative, it would have widened the opportunity for us to read more books there.

bbarta: Is there any possibility for you to do something for the country and its people? Is anybody has any such plan?

Dr Barua: I cannot tell about others’ plan. But, I have some plans for my country and compatriots. Being a physician, I want to contribute to the health sector. I am thus working on health management system and have already established an institution, Health-Tech Foundation.

I want to develop a database the health-related records of the countrymen. The database will keep record of a patient, once he or she gets registered with it. This will greatly help treat that very patient with ease. Such database exists in Denmark.

bbarta: While you are returning to Denmark soon, do you have anything to tell our readers?

Dr Barua: It’s an age of online. I take your reads for the countrymen. The entire nation is concerned about recent incidents. I suggest them not be panicked, to take things easily and be aware of. If we work from abroad jointly with the countrymen, it will not be impossible to overcome the crisis. All of us should remember that the country is yours, mine and ours. Hence, we have to remain united for the sake of the country. Achieved though a bloodshed in Liberation War, Bangladesh cannot fail.
bbarta/SN