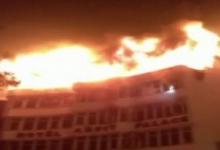 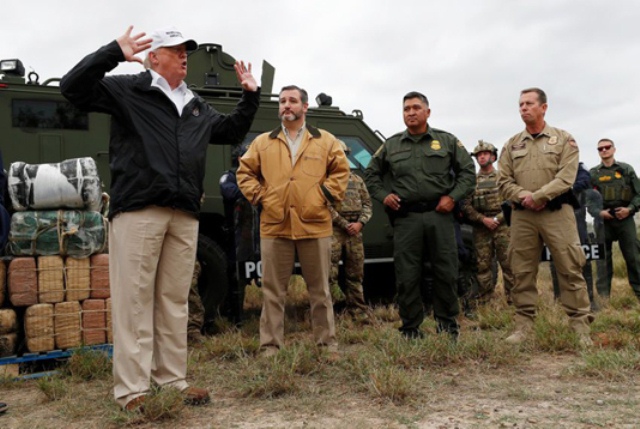 President Donald Trump warned of murderers and gangsters spreading across the country during a visit
to the US-Mexican border Thursday to push his demand for a multi-billion dollar wall.

Trump used the backdrop of the Rio Grande border river at McAllen, Texas, to ramp up what has already turned into a hugely messy political fight with
Democratic opponents, resulting in the shutdown of swaths of the US government.

With typical rhetorical flourishes, Trump said that only building more walls along the Mexican border could stop an onslaught of violent crime.

“They just go where there’s no security and you don’t even know the difference between Mexico and the United States,” he told a meeting of border
patrol officers. “They have women tied up, they have tape over their mouths, electrical tape.”

“If we had a barrier of any kind, a powerful barrier, whether its steel or concrete…, we would stop it cold,” Trump said.

Opposition Democrats are refusing to approve $5.7 billion in wall funding,
saying that overwhelming numbers of illegal immigrants do not commit serious
crimes and that Trump is mainly promoting the project to satisfy his right-
wing base.

Trump said that illegal immigrant crime stretched right up into the north
of the country. However, widely respected studies show that illegal
immigrants commit fewer crimes than people born in the United States.

Trump’s main way of pressuring Congress has been to refuse to sign off on a
host of unrelated, normally uncontroversial, government spending until he
gets his wall funded.

That has resulted in a partial government shutdown now in its 20th day,
with hundreds of thousands of federal employees — including air traffic
controllers, the FBI and Coast Guard — going without pay.

Signaling he’s ready to maintain the game of brinksmanship, Trump tweeted
on arrival in Texas that he will scrap a visit to the annual World Economic
Forum in Davos, Switzerland, which runs from January 21-25.

Trump had been expected to make a brief appearance at the influential get-
together, attended by many world leaders, but said that opposition Democratic
“intransigence” required him to stay home.

Trump said he was ready to expand the debate over funding for a border wall
to some of the other issues surrounding the over-burdened US immigration
system — a suggestion that could open the door to working with Democrats.

“I would like to do a much broader form of immigration,” he said in Texas.

But throughout the day, the frustrated president also repeated his threat
to declare a national emergency and give himself authority to go around
Congress if he can’t get approval for the wall.

Analysts say the declaration would likely be challenged in court as a case
of presidential overreach, in which case the wall still could face being
blocked.

However, it would still give Trump political cover with his base by showing
he’d done what he could. At that point, Trump could end the partial
government shutdown and declare a win.

Trump, who revels in telling stories about his negotiating skills as a New
York real estate magnate, has not managed to get the Democrats to budge on
his demand for the $5.7 billion.

On Wednesday, he invited Democratic leaders to the White House, but walked
out of the meeting.

“A total waste of time,” Trump tweeted. “I said bye-bye, nothing else
works!”

Chuck Schumer, the top Democrat in the Senate, told journalists Trump “sort
of slammed the table,” then “got up and walked out.”

“Again, we saw a temper tantrum because he couldn’t get his way,” Schumer
said.

Trump disputed that Thursday, saying “I didn’t pound the table. That is a
lie.”

“I don’t have temper tantrums,” he said.

Few on either side of the debate dispute that the border poses a
significant challenge, not least because of ruthless Mexican gangs bringing
drugs to the huge US market.

Illustrating the danger, Mexican authorities said Thursday they had found
21 bodies after a gang shootout in Miguel Aleman, a town about 170 miles (270
kilometers) across the border from McAllen, Texas.

However, opponents to Trump say he is hyping the danger posed to Americans
— and the help that more walls would bring — to stir xenophobia for his own
political gains.

Yanira de Hernandez, a 52-year-old Salvadoran migrant who hopes to get to
US soil from Mexico, said she simply dreams of a better life in a country
built on immigration.

“Everyone has the right to emigrate, to seek a new future. We’re not going
to commit any crimes. We hope he (Trump) understands that and that God helps
him to change, because his ancestors were migrants too,” she said in the
Mexican border city of Tijuana.